On October 7-9, I took a whirlwind trip through Budapest, Vienna, and Salzburg. This post will focus on day one: Budapest.

Budapest, the capital of Hungary, is one of the worlds prettiest cities. With over 1.7 million citizens and 200+ museums, fairs, festivals, and other attractions – it’s a world-class cultural hub, too.

We started our day in Budapest with a tour from a local guide who showed us a handful of the major sites and told us about some of the city’s history. It used to be three cities, and it gets its current name from two of those cities: “Buda” and “Pest.” They used to be separated by the Danube, but now the river just runs through the city. Here are some of the sights we encountered on our walk:

Having worked up quite an appetite (we walked at least six miles during that trip!) it was finally time for lunch. Our guide took us to a street lined with restaurants, shops, and other cultural hot-spots. There were craftsmen selling their products and people from all over the world strolling along, enjoying the lively atmosphere. The street was closed to cars, so it was safe to simply walk through.

Lunchtime marked the end of our walking tour, so we said goodbye to our guide and chose a restaurant. I’m definitely *not* sick of Italian food yet, but I was still really excited to try something so different. We sought out a place that looked authentically Hungarian and ordered the most traditional foods we saw. I got chicken paprikash with dumplings – a dish I definitely intend to try to remake when I return home in December. That, plus the hot black tea on such a chilly day, made for an unforgettable lunch experience.

We then found out that our weekend guides had a surprise for us: we’d be going to Budapest’s famous natural thermal baths. The trip was optional, and my friends and I decided at the last minute that we wanted to go. And we were so glad that we did.

We left as it was beginning to get dark, perfect timing to walk around the brightly-lit city. Our guides said that the city would take on a whole new character once the sun went down, and it was hard to imagine what that might be until I actually saw it for myself. We stopped for dinner (yet another great Hungarian dish, a salmon steak with traditionally cooked vegetables, plus a cup of hot green tea – I was into the tea that day – and a creamy mousse for dessert) before setting out to explore. 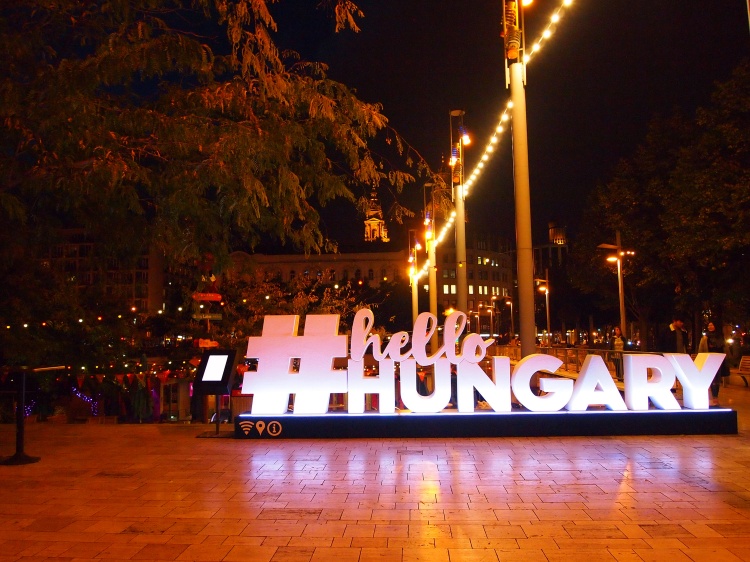 Unfortunately, it was getting late. With the next morning’s early wake-up call in mind, we headed back to the hostel to rest up for our upcoming Austrian adventures. I’ll never forget my time in Budapest, and I’m so grateful that we were able to see so much of the city in our short time there.

‘Til next time, Hungary! Now, off to Austria.

2 thoughts on “Budapest, Vienna and Salzburg | Part One”